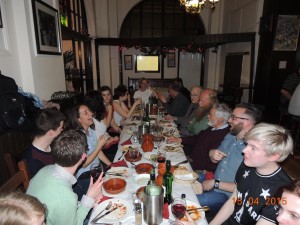 Dr Fear has kindly provided this abstract in advance of his talk:

The history of Roman Hispania (“the land of rabbits”) is little known in Britain. However, the area was crucial in Rome’s fight against Hannibal, and it was to be the site of the dramatic last stand of Julius Caesar’s opponents in the civil wars of the late 1st century BC. Later still, Spain gave Rome three of its most famous emperors: Trajan, Hadrian, and Theodosius the Great. Rome’s adventures in Spain were the reason why January became the first month of the year, and Spain was also the prime producer of the Roman empire’s most sought after culinary delicacy – rotted fish sauce. Roman Spain was indeed a land of contrasts: there were regions where the hand of Rome barely seems to have touched the locals, and also towns and villas that could hold their own with any in the empire. This illustrated talk looks at the history of Rome’s six centuries in Spain, and explores the rich heritage that she left there.

There will be refreshments served after the talk and dinner afterwards for those who would like to come along.