The Whitehead Prize was established in 2015 memory of Anthony Whitehead, a great friend of the branch and of classics.  It is awarded to students (sixth-formers, undergraduate or postgraduate) who have successfully endeavoured to promote classics in the community. If you would like to make a nomination, please contact our secretary, Kat Mawford.

This year’s prize was jointly awarded to Zac Copeland-Green and Bobb Fairbairn for their outstanding contributions. 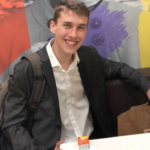 Zac, a student of Manchester Grammar School (and soon-to-be Classics undergraduate), has been awarded this prize based on his work volunteering for the Athena’s Owls project, working with primary-school-aged children in Manchester libraries, and for his efforts in promoting the CA’s activities and seminar series to his fellow students. Zac writes: “It’s been an absolute delight working with the Manchester Classical Association over the last year, and have been made to feel very much at home in promoting the subject alongside “more-established” Classicists. The Athena’s Owls workshops have grown to become something I look forward to every month especially seeing the excitement for Ancient Mythology, Greek Heroes and those monsters (Seriously, there are a lot of monsters!) in all the children who come along. I will most certainly miss when I go off to university – maybe we’ll see an Athena’s Owls Cambridge some time soon. Who knows? It was a even special treat to share my 18th Birthday with the club’s 2nd Birthday.” 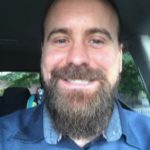 Bobb, currently undertaking a PGCE in Classics, has received this prize for his work in teaching and introducing Classics and Latin to young people in the North West through Classics for All during his Masters at the University of Manchester. Bobb writes: “It was a very great pleasure to volunteer through Classics for All. I had the opportunity to teach Latin to excited and engaged pupils, who would not otherwise have access to the subject. Introducing the Ancient World to young and enquiring minds really reminds you of the things that made you fall in love with the subject in the first place, and the support I received from everyone at CfA was wonderful. It was a fun and enlightening experience for me.”

Congratulations to both Zac and Bobb; all at Manchester CA would like to thank them for their wonderful efforts!